State clerk to be jailed for refusing gay marriage licenses? - The Horn News 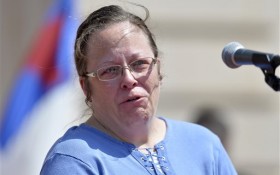 The Supreme Court on Monday ruled against the county clerk, leaving her with perhaps her hardest decision yet: Start handing out licenses or risk potential fines or even possible jail time. According to the Associated Press, Davis appears to have decided to continue defying the court’s orders, and has refused to issue the licenses.

After first hearing the decision, Davis remained in her office with the door closed and blinds drawn. But she emerged a few minutes later, telling the couples and the activists gathered there that her office is continuing to deny the licenses “under God’s authority.”

Davis asked David Moore and David Ermold, a couple who has been rejected four times by her office, to leave. They refused, surrounded by reporters and cameras.

“We’re not leaving until we have a license,” Ermold said.

“Then you’re going to have a long day,” Davis told him.

Davis stopped issuing all marriage licenses in the days after the United States Supreme Court legalized gay marriage across the nation. Two gay couples and two straight couples sued her, arguing that she must fulfill her duties as an elected official despite her personal religious faith. A federal judge ordered her to issue the licenses, and an appeals court upheld that decision. Her lawyers with the Liberty Counsel filed a last-ditch appeal to the Supreme Court on Friday, asking that they grant her “asylum for her conscience.”

Justice Elena Kagan, who oversees the 6th district, referred Davis’ request to the full court, which denied the stay without comment.

As Davis continues to turn away couples, they can ask a judge to hold her in contempt of court, which can carry steep fines or jail time.