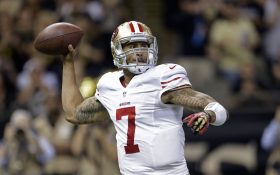 The controversial backup quarterback for the San Francisco 49ers, Colin Kaepernick, made waves this weekend by refusing to stand for the national anthem during Saturday’s preseason game against the Green Bay Packers at Levi Stadium.

He claims he did so in protest of police brutality.

He needs to stop.

This disrespect wasn’t a symbol of revolt against an oppressive government. It was an exercise in vanity by an over-inflated ego. Somehow, by virtue of being an overpaid bench warmer, Kaepernick thinks it is appropriate to inject himself into a national conversation about race relations and policing in America.

Give it a rest. No one wants NFL players as politicians. We want them to play football.

Instead of respecting the amazing opportunity granted to him — and the country that made it possible — Kaepernick has decided to become a barely-coherent political sideshow.

Here’s what he is missing – the opportunity he’s being given is better than anyone else in the world.

It’s because he was born and raised in America that he is being paid tens of millions of dollars every year to play in the NFL. Kaepernick is making generational money for his family — $114 million over six years, not including his endorsements.

Instead of honoring the country that offered him that, he’s disrespecting it.

“I am not going to stand up to show pride in a flag for a country that oppresses black people and people of color. To me, this is bigger than football and it would be selfish on my part to look the other way.”

It’s part of his vague, rambling indictment of police officers in the United States, in which Kaepernick all but accused cops of being state-sanctioned murderers with less training than cosmetologists.

No, really. “There are bodies in the street and people getting paid leave and getting away with murder,” Kaepernick said, referring to the leave officers are placed on following a police-involved shooting.

Of course, Kaepernick — the millionaire sports star that grew up in Wisconsin in a loving, successful family — failed to provide a single example of what is wrong with policing.

In case Kaepernick is unaware, since Friday there has been 9 deaths and 40 people wounded in shootings in Chicago alone — almost all were people of color. One was a mother, Nykea Aldridge, who was shot in the head and killed while pushing her infant in a stroller down the street.

I don’t expect anyone making a grand political gesture towards these victims on national television. Where is Kaepernick’s outrage over the people of color being targeted by gang members every single day in our dying cities? The outrage towards the systematic corruption and violence that has ripped our cities to shreds?

That’s the environment millions of our fellow Americans live in. It is tragic. It is unacceptable. It has got to stop.

Everyone agrees on that. Not many agree on how best to go about it.

But there’s one thing we can all agree on – our country, even with its flaws, is the greatest nation on God’s blue Earth.

The freedoms we enjoy as Americans are so pervasive, we often taken for granted what opportunities are afforded to us.

For example, even rich, moron football players with half-cocked ideas about policing are allowed to disrespect our national anthem because they feel put upon.

Our nation deserves the utmost respect from every person, regardless of their race, creed, or gender. We are all united in brotherhood as fellow Americans.

There are things to fix in our country.

But good sense tells us there is an appropriate way to discuss them. Football players insulting our national anthem isn’t it.

He is welcome to his opinions, but Kaepernick’s rambling, half-baked political commentary can wait until Monday morning.

Clearly he should be more focused on football instead.

Jay Glazer said Colin Kaepernick faces an "uphill battle" to last on #49ers roster. "May not even be on it in the next 2 weeks."