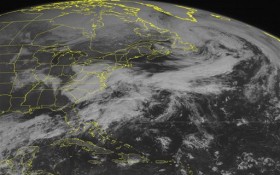 New Englanders will face a messy commute as a spring storm kicks off the work week while others in the Northeast will have an easier time.

Forecasters have predicted an accumulation of 4 to 8 inches of heavy, wet snow in Massachusetts and Rhode Island on Monday. Southeastern Massachusetts could get 8 to 10 inches, which could cause scattered power outages.

Portions of Connecticut could receive anywhere from a couple of inches of snow to about 6 inches.

Northern New England’s outlook is similar. The exception is Maine’s Penobscot Bay area, where there could be up to 12 inches from Bar Harbor north.

In New Hampshire, the Concord area likely will get 2 to 3 inches of snow; Manchester will see a bit less than that. There could be 4 to 6 inches along the seacoast.

The National Weather Service in Mount Holly said Philadelphia could get as little as an inch of snow while portions of New Jersey will see 1 to 2 inches.

New York City residents can expect 1 to 3 inches with about double that on Long Island.