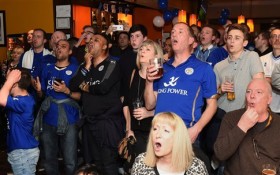 Leicester City players crowded around a television inside the house of teammate Jamie Vardy, locked arm in arm, watching the action 100 miles away. And when the final whistle blew at Stamford Bridge, they raised their arms in triumph. One of the greatest sporting achievements in English history was complete.

In the second tier two years ago, in a relegation fight last season, a 5,000-1 long shot last summer, Leicester is now alongside Manchester United, Liverpool and the other clubs who can call themselves champion.

The Foxes clinched the most improbable title of the Premier League era when second-place Tottenham was held to a 2-2 draw at Chelsea on Monday night. With an insurmountable seven-point lead with two games remaining, Leicester is champion of England for the first time in its 132-year history.

“Championes! Championes! Ole! Ole! Ole!” the jubilant Leicester players sang as they jumped up and down with their arms on each other’s shoulders inside Vardy’s house.

“Nobody believed we could do it, but here we are — Premier League champions and deservedly so,” Leicester captain Wes Morgan said. “I’ve never known a spirit like the one between these boys, we’re like brothers.”

As recently as 2008-09, Leicester was in third-tier League 1, the equivalent of a Double-A baseball team filled with prospects. Just two years ago, Morgan and many of his teammates were playing in the far-from-glamorous second-tier League Championship. They were last in the Premier League in April 2015 before winning six of their last eight matches to avoid relegation, and at the start of this season betting houses favored them to drop back down.

But on Monday, fans who never dreamed their modest club in an East Midlands city with a population of 330,000 would conquer wealthier rivals descended on Leicester’s King Power Stadium to party into the night.

“People saw it last season when everyone expected us to be relegated, but we fought back to prove people wrong,” Morgan said. “This season’s been a continuation of that. We’ve built on the momentum, but I don’t think anyone believed it would come to this.”

Leicester, which will collect the trophy on Saturday when it hosts Everton at home, had not finished higher than second in the top tier since 1929.

English soccer has not had a first-time champion of the top flight since Nottingham Forest in 1978. And for the last 20 years the Premier League trophy has never left London or Manchester, with Arsenal, Chelsea, Manchester United and Manchester City winning all the titles.

Unlike Blackburn’s 1995 champions, Leicester has achieved its success without lavish spending.

Chelsea’s draw also made Leicester manager Claudio Ranieri a league title winner for the first time in his career, 12 years after the 64-year-old Italian was fired by the Blues.

“It’s the greatest achievement in the history of English football and it was led by an Italian,” Matteo Renzi, the Italian Prime Minister, tweeted.

Ranieri’s task when he replaced the fired Nigel Pearson in July was just to keep Leicester in the Premier League. Instead he has masterminded a sporting feat that will resonate for decades.

“I never expected this when I arrived. I’m a pragmatic man, I just wanted to win match after match and help my players to improve week after week,” said Ranieri, who made a brief trip home to Italy on Monday to see his 96-year-old mother. “The players have been fantastic. Their focus, their determination, their spirit has made this possible. Every game they fight for each other and I love to see this in my players.”

At Chelsea on Monday night there wasn’t bitterness that the Blues were surrendering the title to a footballing minnow but joy that Ranieri was the beneficiary.

“Let’s do it for Ranieri,” read one Chelsea fan’s poster at Stamford Bridge where the trophy was presented to Chelsea last May. Fans chanted “Leicester!” repeatedly during the six minutes of stoppage time.

Chelsea players will form a guard of honor for Leicester’s players when they play at the London club in the season finale on May 15.

Leicester missed a chance to seal the title on Sunday when it was held to a draw by Manchester United, but Chelsea got the party started.

Tottenham had to win at Chelsea to keep its bid for a first title since 1961 and led 2-0 on goals from Harry Kane in the 35th minute and Son Heung-min in the 44th, before Chelsea rallied in a fiery London derby where tempers frayed and tackles became wild.

“What a game,” Leicester defender Robert Huth tweeted from the team’s viewing party. “Makes me look like an angel!”

Gary Cahill scored for Chelsea in the 58th and Eden Hazard equalized in the 83rd. Still, Tottenham clinched no worse than fourth place and qualified for the Champions League for the second time.

Ranieri called Chelsea manager Guus Hiddink to thank him for Chelsea’s part in delivering the title to Leicester, which is owned by Thai retail giant King Power. Chelsea, incredibly, is 29 points back.

“(Ranieri said) five times ‘Thanks’, because of the emotion,” Hiddink recalled. “I didn’t see any tears because it was not a Facetime conversation, but his voice was trembling a bit.”

No sports team has defied such odds to triumph and Leicester’s improbable success has provided a feel-good story for a country divided as it prepares to vote on whether to remain in the European Union.