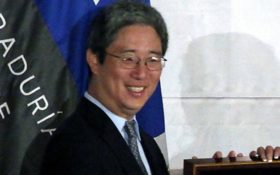 The Justice Department pulled out all the stops to cover up its silent coup against President Donald Trump. Smoking gun proof even shows that the Obama-era DOJ knew their actions were illegal but went forward anyway, a Congressman has said.

At the center of the controversy is Department of Justice official Bruce Ohr and his wife, Nellie, who critics say skirted the law to try and bounce Trump out of the White House.

Trump busted Bruce down from his perch as the fourth-highest person in the Justice Department after learning that he secretly met with members of Fusion GPS, the firm former secretary of state Hillary Clinton and the DNC paid to come up with opposition research against Trump.

It turned out he had closer ties yet. As The Horn News has reported, Ohr’s wife Nellie worked for Fusion GPS.

Bruce met with his wife’s boss, Glenn Simpson, at about the same time that the FBI investigation really took off – and he was in the thick of it.

Talk about a conflict of interest!

But Bruce and his cronies took huge measures to cover up their steps – especially the fact that Nellie was involved.

Nellie worked for Fusion GPS as a contractor “to help our company with its research and analysis of Mr. Trump,” according to the group’s founder, Simpson.

But what exactly did she do? Everyone around her is trying to keep that a deep, dark mystery.

Nellie, who has a soft spot for Stalin, worked for the Obama administration’s CIA in 2010.

After she went to work for Fusion GPS, Bruce reportedly didn’t tell the FBI about it – as required by law – so nobody knew his personal connection to the fake dossier.

It’s understandable that a husband might cover for his wife – but the deep state is trying to bury every shred of evidence deep in the swamp.

Even Bruce said that Obama officials “inexplicably concealed” his family ties to the dossier when it asked for a FISA warrant, according to Rep. Devin Nunes’ memo.

As did the Fusion GPS when talking to Congress, or the media.

And in congressional testimony, Simpson has always played along that Steele wrote the memo.

But the memo actually has three authors: Steele, Nellie, and Edward Baumgartner – who studied Russian History at Vassar while Nellie taught the subject there.

For some reason, Nellie’s fingerprints have been wiped off the memo… and former Obama officials refuse to confess when they learned about the whole fraud.

“Rod Rosenstein won’t tell us when he first learned that Nellie Ohr was working for Fusion GPS,” said Congressman Matt Gaetz (R- Florida). “When did all of the other people at the Department of Justice find this out? Because Rod Rosenstein, I’ve asked him twice in open hearings and he will not give an answer.”

If Ohr is guilty of illegal actions, Rosenstein could be guilty of covering them up.

Those are just the actions taken in the FBI and DOJ – but there is much further proof that it makes the Obama administration look like tombstone.

Will Bruce Ohr, whose family received big money for helping to create the phony, dirty and discredited Dossier, ever be fired from the Jeff Sessions “Justice” Department? A total joke!

Despite all the evidence, it’s not even clear that the inspector general’s office is investigating Bruce, according to The Federalist.

But Bruce won’t skate completely. He’ll have to face heavy questioning from a joint session of the House Judiciary and House Oversight committees on August 28.

Republicans have the ability to investigate Democratic criminals in the Obama administration, because they control Congress right now – something that will disappear if they lose the 2018 midterm elections.