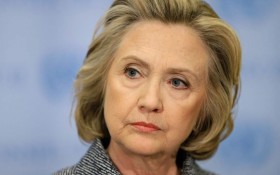 A federal judge has ordered Clinton staffers to stop deleting any more e-mails. That comes after the revelation that two of four e-mails under increased scrutiny may be the smoking gun proof that Hillary Clinton broke the law and disclosed secret information on the American military in her personal e-mails.

The two emails on Hillary Rodham Clinton’s private server that an auditor deemed “top secret” include a discussion of a news article detailing a U.S. drone operation and a separate conversation that could point back to highly classified material in an improper manner or merely reflect information collected independently, U.S. officials who have reviewed the correspondence told The Associated Press.

On Monday, the inspector general for the 17 spy agencies that make up what is known as the intelligence community told Congress that two of 40 emails in a random sample of the 30,000 emails Clinton gave the State Department for review contained information deemed “Top Secret/Sensitive Compartmented Information,” one of the government’s highest levels of classification.

The officials who spoke to the AP on condition of anonymity work in intelligence and other agencies. They wouldn’t detail the contents of the emails because of ongoing questions about classification level.

The drone exchange, the officials said, begins with a copy of a news article that discusses the CIA drone program that targets terrorists in Pakistan and elsewhere. The copy makes reference to classified information, and a Clinton adviser follows up by dancing around a top secret in a way that could possibly be inferred as confirmation, they said.

The emails came to light Tuesday after Sen. Chuck Grassley, R-Iowa, reported that McCullough found four “highly classified” emails on the unusual homebrew server that Clinton used while she was secretary of State. Two were sent back to the State Department for review, but Grassley said the other two were, in fact, classified at the closely guarded “Top Secret/SCI level.”