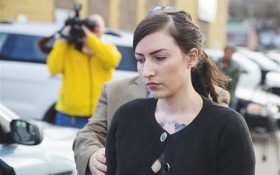 A Pennsylvania couple has been jailed in the starvation death of their 23-month-old daughter, who weighed just 10 pounds when she died last month.

Andrea Dusha, 26, and Michael Wright Jr., 32, were charged Thursday with criminal homicide, endangering the welfare of a child and reckless endangerment in the death of Lydia Wright.

Police say the toddler began foaming at the mouth and stopped breathing after she was left in a car seat for over 13 hours at the family’s squalid Uniontown home.

Online court records didn’t list attorneys for the couple, who face a preliminary hearing March 29. They were ordered jailed without bond, which is required by Pennsylvania law in most homicide cases.

Police say the little girl was left in her car seat for hours at time. According to a criminal complaint, the child was left in a car seat from 9 p.m. Feb. 23 until 10:30 the next morning. That’s when her mother tried to get her to drink a mixture of water, Gatorade and Pedialyte only to see foam coming from the toddler’s nose and mouth as her eyes rolled back in her head, police said.

Dusha rushed the child, who had also stopped breathing, to a hospital where she died, police said.

The family was living at the home without water or sewage services, police say, and investigators also found bottles of urine and dirty diapers, unwashed dishes, tables and counters, and a toilet filled with feces.

The couple has not been charged with using illegal drugs, but police found a syringe and numerous open prescription pill bottles in the bathroom, according to the complaint.