Shocking polls – Beginning of the end for Trump? - The Horn News 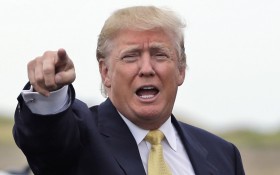 It took just one appearance on the GOP debate’s main stage to launch former technology executive Carly Fiorina  into second place in the race for the Republican presidential nomination.

Even more alarming? Most of her new support seems to be coming from voters who were previously backing billionaire Donald Trump.

According to a CNN poll taken after last week’s GOP debate, Trump remains the candidate to beat for the GOP nomination. But his support dropped from 32 percent to 24 percent — a fairly dramatic swing.

At the same time, Fiorina jumped 12 points from 3 percent to 15 percent, and has been the clear beneficiary of Trump’s downturn.

A second poll of nearly 3,000 New Hampshire voters taken the day after the GOP debate actually has Trump trailing Fiorina by four points in the state. That’s another relatively dramatic reversal, especially for a candidate like Fiorina who wasn’t especially well known among voters just a month ago. It remains to be seen, experts warn, whether those numbers can hold.

Could Fiorina be the newest frontrunner-to-be? And might Trump’s support among voters be softer than he or the GOP establishment ever believed?

Fiorina has the same appeal as Trump in many ways – she’s financially successful, a political outsider, and comes without a lot of the controversy that has surrounded the Trump campaign.

But political insiders are warning that, despite Fiorina’s rise and Trump’s slip in these recent polls, it would be unwise to count The Donald out just yet. Especially in a race that has already proven wildly unpredictable in its early stages.

So far, Trump has proven every prediction of his campaign’s demise to be premature. Often, he’s emerged from such moments with stronger support.

On Friday, Trump told The New York Times he was prepared to spend $100 million of his own money to win the nomination.

Fiorina, on the other hand, currently lacks the money and organization for the lengthy campaign most expect. Wealthy donors have been waiting for signs that she’s politically viable — and they may now have the evidence they need.