[Shocking] Chelsea Clinton SPITS IN THE FACE of her dad! - The Horn News 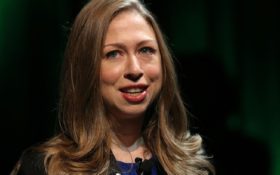 In the world of establishment politics in Washington, D.C., attacking your own political party’s actions in public is unthinkable.

Chelsea apparently thought she was criticizing President Donald Trump when she compared the Department of Justice’s 2017 clarification of current laws to George Orwell’s classic “1984” — a totalitarian government run by the all-powerful Big Brother.

The laws Chelsea was criticizing were put into place by her father in April of 2000.

Of course, this isn’t the only misstep Chelsea has made recently.

In New York, she’s being sued for theft by an author who says Chelsea stole his work and passed it off as her own — and he’s demanding hundreds of thousands in compensation.

But in the broader view, this tweet is far more embarrassing.

Calling one’s own father an Orwellian ruler is an incredible political blunder — and it is further evidence of how insane the so-called liberal “anti-Trump resistance” has become.

In other words, liberal politics is so full of hysterics that their leadership don’t even understand what they’re criticizing.

Really, there’s only two possibilities that Chelsea gives her readers.

Which is it, Chelsea?