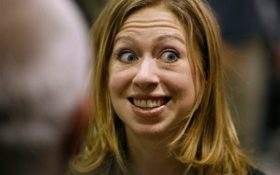 Even for the Clinton family, this is a new low.

A New York author says Chelsea Clinton stole his idea for a children’s book — and used her celebrity status to make it a New York Times best seller.

According to The New York Post, Chelsea is being sued for copyright infringement for her bestselling children’s picture book, “She Persisted.”

Christopher Kimberley said that he sent his illustrated kids book, “A Heart is the Part That Makes Boys and Girls Smart,” to Jennifer Loja, the president of Penguin Young Readers, for publishing consideration in May 2013.

The lawsuit claims Loja took that book and shared it with Chelsea, who then copied it for her book.

“I did months of painstaking research on my book. Her version looks like a ninth-grade homework assignment. I am in disbelief,” Kimberley told The Post.

Chelsea’s book has been at the top of The New York Times bestseller’s list for children’s picture books for the past five weeks.

Kimberley said in his lawsuit: “The appearance of impropriety is striking.”

In addition to Chelsea, Kimberley is also suing publisher Random Penguin House. His lawsuit is asking for up to $150,000 in damages, as well as any ill-gotten profits from the book.