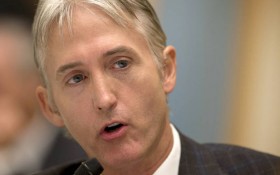 South Carolina Congressman Trey Gowdy, a Tea Party favorite who was mentioned as a possible successor to former House Speaker John Boehner, appears ready to endorse a candidate in the GOP presidential race.

The Rubio campaign announced that Gowdy would be making appearances with Rubio in Iowa on Tuesday and Wednesday this week. Gowdy could help Rubio shore up support among Iowa conservatives.

“Marco is a rock solid conservative and a leader we can trust,” Gowdy said in a release issued by the Rubio campaign. “I look forward to campaigning in Iowa with him, and introducing my good friend to voters across the state.”

Gowdy’s endorsement of Rubio is likely to anger Republicans who have rallied around outside candidates like billionaire Donald Trump.

In anticipation of Gowdy’s endorsement of Rubio, Trump went on the attack.

During a Sunday appearance on “Fox & Friends,” Trump blasted Gowdy’s performance on a Congressional panel that questioned former Secretary of State Hillary Clinton about the 2012 on the American diplomatic compound in Benghazi, Libya.

“So I hope he does a lot better for Marco than he did for the Benghazi hearings. Because they were not good. That was not a pretty picture,” Trump said.