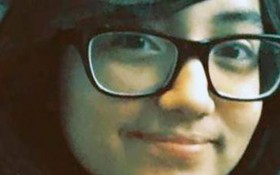 Amid concerns that a missing 14-year-old Houston-area girl is in danger after possibly having been with her father when he was killed and his burned body dumped near a ditch in a rural area north of the city, authorities searched for her Tuesday with help from the FBI.

“She is certainly in great danger,” McRae told reporters Monday.

In a statement Tuesday, McRae said, “At this time the Walker County Sheriff’s Office is working with state and federal resources in the Adriana Coronado case. When some headway is made we will be releasing additional information if available via a press release or news conference.”

An Amber Alert was issued Monday for Adriana. She is described as being 5 feet tall, weighing 105 pounds, having brown eyes and usually wearing black framed glasses.

The body of Adriana’s father, Caesar Vladimir Coronado, was discovered Sunday in Walker County. Authorities believe he was shot. His burned pickup truck was found near Conroe, north of Houston in Montgomery County. The truck was found about 45 miles south of where the body was found, in a rural area in neighboring Walker County.

“Investigators with the department have reason to believe that Adriana may have been with her father at the time of the homicide,” McRae said.

The sheriff said investigators are working the case as if Adriana was abducted.

The FBI, including one of its Child Abduction Rapid Deployment teams, is helping in the search, said Christina Garza, a spokeswoman with the FBI’s Houston office. Garza referred questions about the investigation to the Walker County Sheriff’s Office. Houston police are also helping.

Adriana was last seen Saturday in the Houston suburb of Katy, where she lives.

McRae said investigators were still trying to determine what Adriana and her father were doing in Walker County.

Authorities think Adriana is likely in another area. McRae said investigators are looking at the possibility the girl might have been taken out of the U.S.

No motive for Caesar Coronado’s killing has been determined, McRae said.