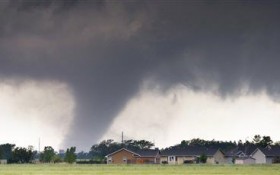 The Storm Prediction Center in Norman, Oklahoma, says the most dangerous weather is predicted for a 55,000-square-mile area stretching from northern Oklahoma to southern Nebraska, including the Oklahoma City area.

Forecasters say that area could see powerful winds, tornadoes and hail as large as baseballs or softballs on Tuesday afternoon and evening.

In all, 24 million people are at a slight risk or higher of experiencing severe weather Tuesday in an area from San Antonio to Omaha, Nebraska. In the east, a separate storm system could bring thunderstorms, strong winds and hail to Philadelphia, Baltimore and Washington, D.C., but no outbreak is expected there.