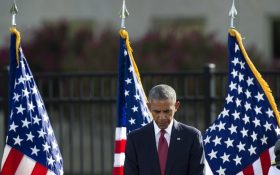 President Barack Obama has already infuriated the families of 9/11 victims by promising to veto a bill that would allow them to sue Saudi Arabia.

And after yesterday’s selfish actions, Obama’s relationship with those families may be more strained than ever.

After arriving early at the Pentagon for a ceremony to mark the 15th anniversary of the 9/11 attacks, Obama demanded the moment of silence be moved up.

The move was done apparently “in order to accommodate a restless President Obama.”

That’s according to The Daily Caller, which said, “A Department of Defense official confirmed that the moment of silence was moved up a few minutes and that Obama was the one who made the decision, saying the president ‘moved early.’”

But that left people at the ceremony bewildered and furious. The moment of silence was intended for 9:37 AM, the exact moment when American Airlines Flight 77 slammed into the Defense Department’s headquarters, killing 184 people.

Yesterday, by changing when the moment of silence was held, Obama decided his time was more important than properly honoring the victims.

The president then spoke to the hundreds of service members, and relatives and survivors of the attack that occurred at the Pentagon on September 11th, 2001 attended the ceremony through their intended moment of silence.

“The question before us, as always, is: How do we preserve the legacy of those we lost? How do we live up to their example? And how do we keep their spirit alive in our own hearts?” the president said in his speech – right after he’d dishonored these same victims.

What else are we to expect?