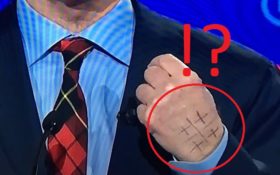 It was a blink-and-miss moment during CNN’s 2020 Democratic primary debate on Tuesday — but it left the internet buzzing.

While the mainstream media focused on the growing feud between Sens. Elizabeth Warren of Massachusetts and Bernie Sanders of Vermont, on social media another question was trending.

What were the strange symbols that billionaire Tom Steyer had secretly written on his left hand?

The crudely drawn image is of five crosses: One large cross in the center, and four smaller crosses in each corner.

“Why is Steyer playing tic tac toe with himself on his hand?” asked Twitter user @elivalley.

Why is Steyer playing tic tac toe with himself on his hand pic.twitter.com/wpwOlxwr79

Others wondered if Steyer had written himself a “cheat sheet.”

Some users were simply baffled —

I'm sorry but what? is this?? pic.twitter.com/1kTcT9qt1O

So what is the strange symbol the billionaire coal investor had drawn on himself?

According to Steyer, it’s a symbol he’s drawn on himself every day for the last two years as a reminder to always be honest.

“A symbol with five crosses like this is known as a Jerusalem Cross, and it was employed as the symbol of the Kingdom of Jerusalem from the 13th Century,” The BBC reported. “The kingdom was established by crusading European Christians who invaded and conquered Muslim lands.”

What does the Jerusalem Cross mean in Christianity? It’s up for debate.

“There is not one agreed meaning to the five crosses – various theories suggest they could represent Christ and the four gospels, five wounds suffered by Christ on the cross, or the four points of the compass,” the BBC reported.

Steyer claims he didn’t know it was a Christian symbol when he started drawing it on his hand in 2017.

“It means to tell the truth no matter what the cost is,” Steyer told Buzzfeed. “For a while now, I have drawn it on my hand every day to remind myself to always tell the truth. I later discovered that it has traditionally been known as a Jerusalem cross.”

Unfortunately for Steyer and his campaign, a picture of his secret 13th-century symbol wasn’t the only buzz he received on social media.

He also gained President Donald Trump’s eye, who, along with the Republican National Committee, pointed out the billionaire liberal’s hypocrisy —

Steyer is running low on cash. Nobody knows him. Made his money on coal. So funny! https://t.co/vS48ta5IFr