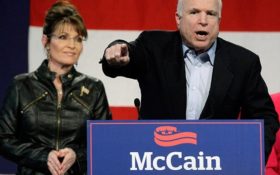 Former Alaska Governor Sarah Palin says she was shocked to hear that Senator John McCain regrets choosing her as vice president during his 2008 presidential run.

Palin described herself as feeling a “perpetual gut-punch” upon hearing the attack, and claims she was confused by the timing.

As reported by The Horn News, McCain highlighted in his new book feelings of guilt over choosing Palin as his running mate. He wished he had chosen a less conservative choice instead: Connecticut Senator Joe Lieberman. McCain claimed his advisers warned against it due to Lieberman’s pro-choice values.

“That’s not what Sen. McCain has told me all these years, as he’s apologized to me repeatedly for the people who ran his campaign,” Palin told The Daily Mail. She said over the years, “I stop him all the time and say, ‘Please don’t apologize.'”

Hearing the exact opposite was upsetting to Palin.

“It’s not a real fun thing that part of my job is the requirement – is having to read the news every day,” Palin lamented.

Palin speculated that McCain himself does not blame her, but instead the attack is coming from his inner circle.

“I attribute a lot of what we’re hearing and reading regarding McCain’s statements to his ghostwriter or ghostwriters,” she explained. “I don’t know all the details of his condition right now. It happens to me also where people speak for me and a bell is rung, and you can’t un-ring the bell.”

“I don’t know unless I heard it from Sen. McCain myself,” she said.

Palin claims there is absolutely nothing for McCain to apologize for, former President Barack Obama being elected was the perfect storm and worked out the way it should.

She claims the Obama years, “opened a lot of people’s eyes to the trajectory of our country,” accelerating the Trump era into place.