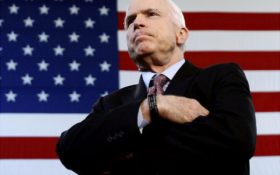 Senator John McCain was diagnosed with an aggressive form of brain cancer last year, and has been absent from the Senate since December.

As his health continues to decline, the senior senator has begun to lash out. He trashed former running mate Sarah Palin, and insisted he does not want President Donald Trump to attend his funeral.

According to a New York Times report, McCain would like Vice President Mike Pence to attend instead of Trump. In addition, he wants former Presidents George W. Bush and Barack Obama to deliver eulogies.

“I don’t know how much longer I’ll be here,” McCain said in an audio excerpt of his forthcoming memoir, “The Restless Wave,” NPR reports.

McCain was also visited by his daughter, Meghan, who expressed thanks for the compassion her family is receiving during this hard time.

Going home to Arizona to be with my family – will be back on @TheView Tuesday. Thank you all again for your prayers, patience, understanding and compassion during this time. It means the world to me and my entire family. ????????????

It is no secret that McCain does not favor Trump. The Arizona senator cast a vote against Trump’s major policy goal of repealing ObamaCare in July — the move earned him a call from Obama, and disdain from Trump.

According to The Times report, the White House has already been informed of McCain’s wishes to have Pence attend his funeral services.

McCain’s new book does not hold back on his opinions about the president and other conservatives, including Sarah Palin.

Trump “seems uninterested in the moral character of world leaders and their regimes,” he writes of the president, according to The Times, which obtained a copy of the book. “The appearance of toughness or a reality show facsimile of toughness seems to matter more than any of our values. Flattery secures his friendship, criticism his enmity.”

McCain also highlights his guilt over choosing former Alaska Governor Sarah Palin as his running mate in the 2008 presidential election, and says he should have picked former Connecticut Senator Joe Lieberman. He blamed his advisers, who McCain warned him away from Lieberman’s pro-choice views.

John McCain is a very arrogant and bitter man.

McCain has spent many years of his life supporting democrats and betraying the people who voted him into office.

Trump is too busy making America great to attend your funeral…
No need to not invite him.#maga #JohnMcCain

If you ever needed proof the Swamp sticks together, here it is.

Ummm…. Is that suppose to hurt Trump’s feelings? If anything, he’s probably happy to hear it.

He has MANY other more important things to do such as Draining the Swamp that McCain helped create.