Ruth Bader Ginsburg's will had a surprise in it... - The Horn News 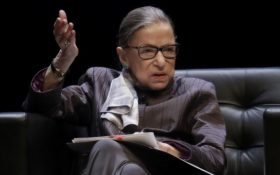 The last will and testament of late Supreme Court Justice Ruth Bader Ginsburg outlined how her multimillion-dollar fortune would be divided among three different parties.

And one of those named will surprise you.

According to a report from The Daily Caller, Ginsburg left the majority of her estimated $6 million estate to her two children, James and Jane Ginsburg.

TMZ reported that Ginsburg’s personal property — her car, furniture, books, jewelry, clothing, etc — named in the will was worth approximately $500,000. The rest of her personal property, the specifics of which were not disclosed, was estimated at $5.5 million.

James and Jane, who were also named executors of Ginsburg’s will, each received an estimated $3 million. Ginsburg’s longtime housekeeper, Elizabeth Salas, was the third person named and will reportedly receive $40,000 in cash.

Salas was close to Ginsburg, having worked for the late justice for 22 years. She was seated next to then-Democratic presidential candidate Joe Biden when Ginsburg lay in state at the Capitol Rotunda.

The report on the $6 million estate only includes Ginsburg’s personal property — called her probate estate.

It does not include any money set aside in private trusts.

Appointed by former President Bill Clinton, Ginsburg served on the Supreme Court from 1993 until her death in September 2020. She was 87-years-old when she passed away from complications from metastatic pancreatic cancer.