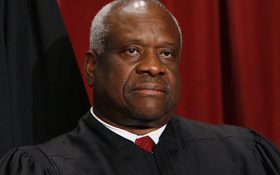 In a time of an increasingly divided U.S. political world, Justice Clarence Thomas wanted Americans to learn his final words to the late Justice Ruth Bader Ginsburg, who died Friday at the age of 87.

Thomas and Ginsburg were complete opposites on the bench. But Thomas had some last words on Ginsburg that he wanted to share to the public.

Ginsburg was a liberal icon. Thomas is a conservative stalwart. But while the two were divided politically, they were close personally.

In a moving public statement released Saturday, Thomas said he and his wife were “heartbroken to learn of the passing of our friend” and talked about his professional and personal relationship with Ginsburg.

Thomas said he was also close to Ginsburg’s late husband, Marty, and would miss them both dearly.

He called the late justice a “picture of grace and courage” that never let her health challenges interfere with her work or professional demeanor.

My wife, Virginia, and I are heartbroken to learn of the passing of our friend, Justice Ruth Bader Ginsburg. Ruth and I first met when I began my tenure on the D.C. Circuit in 1990. With the exception of the brief period between our respective appointments to the Supreme Court, we have since been judicial colleagues. Through the many challenges both professionally and personally, she was the essence of grace, civility and dignity. She was a superb judge who gave her best and exacted the best from each of us, whether in agreement or disagreement. And, as outstanding as she was as a judge, she was an even better colleague – unfailingly gracious, thoughtful, and civil.

Through her loss of her wonderful husband, Marty, and her countless health challenges, she was a picture of grace and courage. Not once did the pace and quality of her work suffer even as she was obviously suffering grievously. Nor did her demeanor toward her colleagues diminish. The most difficult part of a long tenure is watching colleagues decline and pass away. And, the passing of my dear colleague, Ruth, is profoundly difficult and so very sad. I will dearly miss my friend.

You can read all of the Supreme Court justice’s final statements on Ginsburg and her legacy below.