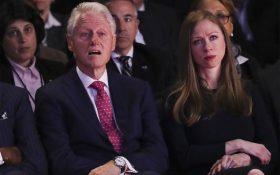 Conservative commentator Rush Limbaugh made a controversial claim on his radio program when discussing the relationship between former President Bill Clinton and pedophile Jeffrey Epstein — but he says he’s seen proof.

Rush claimed on his show Thursday that there was evidence in Epstein’s apartment that showed he was “sexual partners” with Clinton — and Epstein was so proud, he showed it to almost every one of his visitors.

“Have you all seen the painting of Bill Clinton decked out in a blue dress wearing hot red high heels draped over an armchair that was supposedly in the home of Jeffrey Epstein?” Rush asked his guest.

Then he dropped the bombshell.

The radio host said the picture was being misinterpreted.

It wasn’t a gag. Instead, it was proof of their deviant sexual escapades.

“There’s only one way to look at this,” Rush continued. “That photo is a tribute from Epstein to Clinton!”

“I mean, what was Clinton doing? He was having an affair with an intern. What did Epstein do? Basically the same kind of stuff. The age difference of the girls was somewhat different. They were buds!” he explained.

“I’m telling you, that photo, that thing, that picture of Clinton? That’s an in-your-face to all of us. That’s a private joke between them,” Rush explained. “That’s not Epstein trying to humiliate Clinton. That photo, that painting… whatever it is… is a tribute. Do not doubt me on this.”

It’s not just Bill that was featured in a blue dress in Epstein’s front room, either, Rush claimed.

“There’s also an accompanying picture of Hillary Clinton wearing a similar-style blue dress,” Rush said. “Bill Clinton is sitting in the chair with both legs crossed over the arm of one of the chairs. He’s wearing a pair of hot-red heels, spiked heels. It’s a picture of Clinton as he appears today — like 85 years old or 90, whatever it is. He’s looking right at you the way Uncle Sam does on the military recruitment posters, ‘We Want You!'”

“They are sexual partners, gang. There’s no disconnect here,” he claimed.

“It’s a tip of the cap, and it’s also an in-your-face to everybody who was supposedly morally outraged by Bill Clinton,” Rush continued. “I don’t think there’s any question about it. It’s a way of honoring the unfairly victimized Bill Clinton by mocking the seriousness of the whole thing. It’s another way of saying, ‘Screw you,’ to the people who made a big deal out of the fact that the president was having an affair with an intern.”

“I think this portrait, whatever you want to call it, actually tells us a lot about how close Epstein and Clinton were. But there are people who think that Epstein put this up here as some sort of a joke about Clinton,” he said, laughing. “No way, folks. As I say, it’s a tribute.”

This painting wasn’t a deep, dark secret that was hidden away.

Epstein reportedly wanted his guests to see the painting, so he proudly showed it off in the front of his huge luxury apartment.

“It was hanging up there prominently — as soon as you walked in — in a room to the right,” a source told The New York Post. “Everybody who saw it laughed and smirked.”