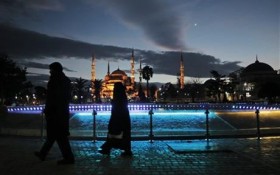 A sonorous burp after a doner kebab led to a fine for Vienna bartender Edin Mehic. But the belch also had its benefits — an all-expenses paid trip to Istanbul, compliments of a chain famed for the Turkish specialty.

A policeman ticketed and fined Mehic last month asserting the belch was too loud — and too close for comfort. But many took his side, including an Istanbul-based company serving the sliced meat sandwich that saw Mehic’s punishment as a downer for the doner.

The chain on Monday confirmed that it picked up the tab for the flight, hotel and a sightseeing tour during Mehic’s two-day visit last week.

And there’s more to what Mehic calls his “dream trip.” The chain’s CEO wrote him a check reimbursing his 70-euro ($77) fine.