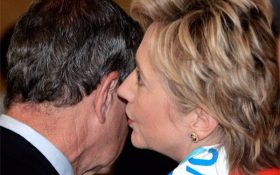 New emails reveal that the Clinton campaign was conspiring with the very department investigating her — and her campaign appears to have tampered with the press coverage of the investigation by communicating with the State Department on what they were releasing.

The Justice Department official who notified Congress on Monday that they would “dedicate all necessary resources” in the investigation into Clinton’s emails, was sending tips to the Clinton campaign about new developments in the case the entire time.

In a May 19th, 2015 email with the subject line, “Heads up,” Justice Official Peter Kadzik wrote to Podesta, “There is a HJC (House Justice Committee) hearing today where the head of our Civil Division will testify. Likely to get questions on State Department emails. Another filing in the FOIA case went in last night or will go in this am that indicates it will be awhile (2016) before the State Department posts the emails.”

Podesta forwarded the email to other Clinton staffers with the mysterious note, “Additional chances for mischief.” While it’s unclear what Podesta was implying, any mischief coming out of the Clinton campaign is safely assumed to be corrupt.

It’s no surprise that Kadzik would feel the need to inform Podesta, since the two have been friends since the 70s when they attended Georgetown Law School together. Kadzik was the lawyer for Podesta during the Monica Lewinsky scandal when Podesta was President Bill Clinton’s Chief of Staff. In previously released emails, Podesta praised Kadzik, saying he helped keep him, “out of jail.”

And that’s not the only tip Clinton got from her buddies conducting the allegedly, “non-partisan investigation.”

Prior to Kadzik’s excitement for mischief, the State Department provided Clinton aides with the agency’s official response to a New York Times reporter in advance of the newspaper’s March 2015 report that Clinton had used a private email account to conduct all of her work-related business as secretary.

In a March 1, 2015 email, State Department press aide Lauren Hickey told Clinton’s spokesman Nick Merrill and two other advisers that then-State Department spokeswoman Jen Psaki had “just cleared” a reply to the Times. Hickey provided the agency’s response to the Clinton aides and also appeared to agree to a change requested by the campaign, saying: “Yes on your point re records – done below.” It is not clear what specific change was requested and made.

In a hacked email chain from March 17, 2015, Clinton’s campaign advisers discussed how to respond to a request by a Times reporter for comment on an upcoming story about how top State Department aides used private email accounts to communicate with Clinton.

Campaign spokeswoman Jennifer Palmieri wrote: “Strikes me as a big problem that the NYT is having selected emails leaked to them and I think we should do a call to discuss the proper way to handle.” The email exchange occurred about a month before Clinton officially launched her presidential bid in a video released in April 2015.

In an August 2015 email exchange, Clinton aide Huma Abedin raises mental health concerns of Clinton, pointing out that she wasn’t equipped to handle verbal questions about the emails. Abedin asked for a longer list of questions and answers “so at least it’s out there and maybe she won’t have to do it verbally again?”

There’s no more denying it — the officials in charge of the Clinton investigation were in bed with the Clinton campaign — and the mainstream media helped them get away with it.