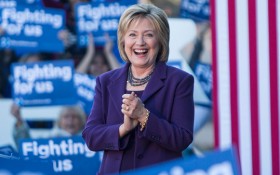 The FBI investigation into former Secretary of State Hillary Clinton’s email server scandal appears to be wrapping up, and a report this week from the Los Angeles Times claimed Clinton and her closest aides could soon be brought in for questioning.

But if President Obama has his way, the process may not get any further than that — at least not until after the 2016 election.

That’s according to former House Minority leader Tom DeLay, who knows his way well around the Washington political process.

And in an interview yesterday with the “Steve Malzberg Show,” DeLay laid out exactly how the Obama administration will look to stall the Department of Justice to keep Clinton’s presidential campaign from getting derailed.

The plan revolves around delaying Clinton’s case while a special prosecutor is appointed.

According to DeLay, the appointment of a special prosecutor and that prosecutor’s subsequent review of the evidence against Clinton are a stalling technique “that gets this case all the way through the election.”

“That’s what I think is going to happen [for] stalling purposes. That’s how you get it past the election,” DeLay said.

DeLay isn’t the only politician speaking out against Clinton and the progress of the investigation. This week, Sen. Chuck Grassly (R-IA) also weighed in.

“With all the troubles she’s getting on email, and the FBI’s going to question her, I would imagine she’d want to change the tone of her campaign,” Grassley told Politico in an interview published Monday.

The investigation revolves around Clinton’s use of a private “home brew” server while secretary of state. While Clinton claims she did not handle any classified information over the private account, subsequent federal reviews of the emails found that many were too sensitive to be released to the public. Some of those emails were then deemed classified.