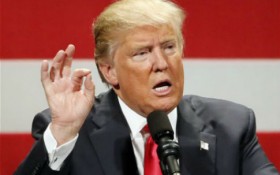 Some of the fiercest opponents of Republican presidential nominee Donald Trump vowed they would do whatever it takes to stop him throughout the primary process.

Over the weekend, reports surfaced that some of the most powerful Republican insiders were gathering and planning to launch a third-party campaign to derail the Trump train.

According to Costa’s report, “The closed-door huddle was held at the J.W. Marriott hotel in Washington, which is just blocks from the White House. It was requested by Kristol, according to a person close to Romney who requested anonymity to discuss the session. Kristol said the conversation was held over glasses of water.”

“Kristol has been working informally for weeks to seek out a prominent political or military figure who could be drafted into the general-election contest, such as retired Marine Gen. James N. Mattis, who recently declined such overtures,” Costa said.

This is all despite the clear will of the GOP voters, some of whom pointed out that Trump in 2016 gained a larger percentage of the popular vote than Romney’s failed candidacy.

Republican and conservative foes of Trump have also announced plans to cause headaches for the party’s presumptive presidential nominee at this summer’s GOP convention.

Anti-Trump forces have announced they will use this July’s GOP meetings to keep him from reshaping the party, perhaps with fights over the platform or even his vice presidential pick, according to a report by The Associated Press.

Trump’s foes concede he’s likely to arrive in Cleveland exceeding the 1,237 delegates needed to become the nominee. Yet many are still reeling from the contest’s unexpected finale last week and are just starting to think about what they could do at the convention that would be productive.

“There’s going to be a lot of thinking, a lot of praying and a lot talking between all of us,” said Kay Godwin, a Cruz delegate from Blackshear, Georgia. “I wish I could give you an answer right now but I think if I did, it would be out of emotion.”

“There are probably some who hope Trump will stick his foot in his mouth or some scandal will come out and that they’ll be able to rally everybody at that point, but at this point there’s really nothing they can do” to block his nomination, said Jason Osborne, a GOP consultant.

Many Trump opponents see the Republican platform, the party’s statement of ideals and policy goals, as a place for a stand in Cleveland. The convention’s 2,472 delegates must approve the platform before formally anointing the presidential nominee.

All — including those chosen to support Trump — can vote however they want on the platform. Many conservatives say they will use that vote to keep Trump from reshaping GOP dogma.

“We’d want to make sure the platform is protected from Donald Trump,” said Rory Cooper, senior adviser for the Never Trump political committee.