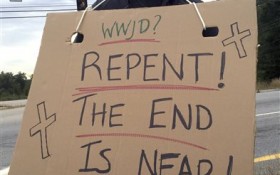 Michelle Tetreault’s daughter didn’t know what “repent” meant when she spotted a man with a sign around his neck warning “Repent! The end is near!” But she’s plenty sorry now that her mom is facing a $124 traffic ticket for using her cellphone to snap a picture of the man.

With more than 40 states banning text messaging for drivers and a dozen states prohibiting use of hand-held cellphones, police departments around the country are getting creative when it comes to enforcement. New York has given state police 32 unmarked SUVs to allow officers to better peer down at drivers’ hands. In California, officers with the San Bernardino police have posed as panhandlers with signs reading: “I am NOT homeless. SB police looking for seatbelt/cellphone violations.”

“About two weeks ago, I was sitting in an unmarked car watching traffic, and everyone and their brother was on their phone,” he said. “So we were looking at innovative ways to maybe come down on people.”

He turned to the International Association of Chiefs of Police, which noted that other departments have used tractor-trailers or planes to look down on drivers or positioned undercover officers on traffic medians. Somersworth settled on a five-day sting, with two officers — one with the “repent” sign and the other posing as a homeless panhandler. Officers stopped about 110 cars and issued 96 tickets.

The response from most was along the lines of “Hey, you got me, I was wrong,” though a few argued entrapment, Crombie said.

“It’s not entrapment. Entrapment is when you induce someone to do something they normally wouldn’t,” he said. “We have an obligation to make Somersworth a safer place to live, and that’s why we took this step.”