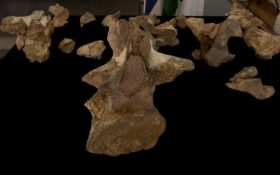 Brazilian scientists on Wednesday announced the discovery of what they say is the largest dinosaur ever found in South America’s biggest country.

Diogenes Campos, director of Rio de Janeiro’s Earth Sciences Museum, said he named the 25-meter-long dinosaur “Austroposeidon magnificus.” It belonged to the Titanosaur group of herbivores that had large bodies, long necks and tails and relatively small skulls, he said.

He said the titanosaur was about 6 to 8 meters tall and lived in what is now Brazil some 70 million years ago.

Fossils of the dinosaur’s neck and spinal vertebrae were found near the city of Presidente Prudente in Sao Paulo state in the 1950s by paleontologist Llewellyn Ivor Price, who died in 1980 without being acknowledged for the discovery.

Paleontologist Alexander Kellner said Price had so many other specimens to identify that he did not have time to get to Austroposeidon magnificus. The bones weren’t studied until recent years.

Titanosaurs lived during the Cretaceous Period in areas that today are in South America, Africa, Antarctica and Australia.