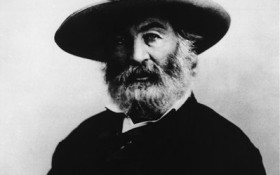 A rare letter written by the poet Walt Whitman for a wounded Civil War soldier has been found in the National Archives.

The Washington Post reports it was discovered last month by an Archives volunteer on a team preparing Civil War widows’ pension files to be digitized and placed online. It’s one of only three known to exist.

“It doesn’t get much bigger, in my eyes,” said Jackie Budell, an archive specialist who oversees the project. “It’s just simply stunning. … We’re not going to find another one like this, probably, for a while.”

The letter was written for Pvt. Robert N. Jabo of the 8th New Hampshire infantry, who was dying of tuberculosis in Washington’s Harewood Hospital. He was sick and illiterate. So Whitman, a cheerful, bearded man who regularly visited hospitalized soldiers, offered to write for him. Sadly, Jabo died in a charity hospital 11 months after the letter was written.

Whitman, a poet, journalist and essayist, often made the rounds of the local hospitals, where he dispensed snacks and money. He also sat with wounded and dying soldiers and wrote letters for them.

“I do a good deal of this, of course, writing all kinds, including love letters,” Whitman wrote in a dispatch for the New York Times in 1864.

A century and a half later, few of those letters have surfaced.

The Falls Church librarian was sorting through pension files at the archives when she drew Jabo’s file from its envelope.

“I’m looking through the file, and I see this letter, and I start reading it,” she said. On the back, she found a surprise: “Written by Walt Whitman, a friend.”

“Ah!” Wilson said she exclaimed. “Look what I found!”

Wilson showed the letter to Budell, who was cautious at first. “Part of my job is authenticating such finds,” Budell said.

David S. Ferriero, who heads the National Archives, sent a scan of the letter to Whitman scholar Kenneth M. Price, at the University of Nebraska. Price is co-director of the Walt Whitman Archive and an expert on Whitman’s handwriting.

Price noted the unique way Whitman wrote the letters x, d, and I, and how he often used a plus sign instead of the word “and.”

Whitman’s signature in the letter resembles other Whitman signatures, Price said in an email.

The letter will be housed in a vault at the National Archives with other valuable documents.