Rand Paul set to drop out of presidential race? - The Horn News 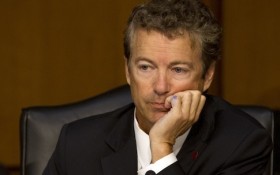 U.S. Sen. Rand Paul officially filed for re-election in his home state Monday, a move that has some speculating that he may withdraw from the presidential race soon.

Paul is the only major candidate running for president who is running for two public offices at once. Texas Sen. Ted Cruz and South Carolina Sen. Lindsey Graham aren’t facing election bids in 2016 for their current jobs and Sen. Marco Rubio of Florida decided not to seek re-election in favor of his presidential campaign.

In a telephone interview with The Associated Press, Paul noted that he is not the first to file parallel candidacies in the same year, citing House Speaker Paul Ryan’s double candidacy in 2012 when he ran for re-election and as Mitt Romney’s vice presidential ticket-mate.

“A lot of people who support me want to have my voice on the national stage,” Paul said.

The move is complicated for Paul because of a Kentucky law barring candidates from appearing on the ballot twice in the same election. The state Republican party decided to hold its first-ever presidential caucus in March to avoid the conflict in its normal primary election in May. Paul raised $250,000 to cover the caucus’ cost. And on Monday, he is scheduled to pay the $15,000 filing fee to participate in the caucus.

In the interview, Paul said he expects his home-state caucus to be “very competitive” because “there (are) 10 candidates running and all of them have attributes that will attract Republican voters.” Jeb Bush, Marco Rubio, Donald Trump, Ben Carson and Ted Cruz have already filed for Kentucky’s caucus. Paul said he is focusing most of his efforts on the Iowa caucuses and the New Hampshire primary and focusing on students, independent-minded voters and “the liberty movement within the GOP.”

Paul said his message of stopping the government from collecting personal phone records and decriminalizing minor marijuana offenses “resonates with the youth in a way that nobody else really on the Republican side is able to do.” And he said his policy that the United States does “not need to be involved in every civil war around the world” will attract independent-minded voters.

But his efforts to draw attention have been thwarted by political outsiders Trump and Carson.