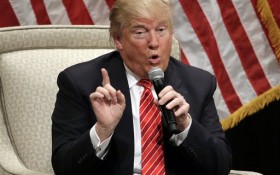 Dozens of rabbis are planning to boycott a scheduled speech by Donald Trump to the nation’s largest pro-Israeli lobbying group to protest what they feel is divisive rhetoric by the Republican presidential front-runner.

The move also underscores some Jewish leaders’ anxiety about Trump’s views toward Israel.

The rabbis plan to hand out fliers at next week’s gathering of the American Israel Public Affairs Committee (AIPAC) in Washington calling for attendees to either skip Trump’s speech on Monday or stand up as the candidate starts speaking and silently walk out.

Trump has also left some Jewish leaders uneasy with his pledge to stay neutral during peace talks between Israel and the Palestinians.

A Trump spokeswoman did not reply to a request for comment.