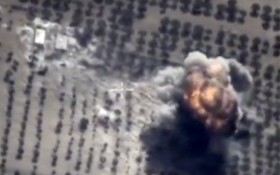 Russian airstrikes in Syria have killed hundreds of militants, President Vladimir Putin said Friday as he called for a shared military effort of ex-Soviet nations to prevent possible militant incursions to Syria from Afghanistan.

Putin, speaking in Kazakhstan, said the situation in Afghanistan is “close to critical” and called on other ex-Soviet nations to be prepared to act together to repel a possible attack.

“Terrorists of all kinds are getting increasing clout and aren’t hiding their plans of further expansion,” Putin said in televised remarks. “One of their goals is to push into the Central Asian region. It’s important that we are prepared to react to this scenario together.”

He said a planned joint buildup of border guards of several ex-Soviet nations should help fend off the threats coming from Afghanistan.

Afghanistan shares a porous border with Turkmenistan, Uzbekistan and Tajikistan, which has been a source of drugs coming into Russia and is a long-standing worry of Moscow’s.

Putin told a meeting of leaders of ex-Soviet nations in Kazakhstan that the Russian military has achieved “impressive” results during the air campaign in Syria that began on Sept. 30.

“Dozens of control facilities and ammunition depots, hundreds of terrorists and a large number of weapons have been destroyed,” he said.

Putin reaffirmed that the Russian bombing blitz against the Islamic State group and other radicals in Syria will continue “for the period of the Syrian troops’ offensive operations against terrorists,” but wouldn’t elaborate.

He said between 5,000 and 7,000 people from Russia and other ex-Soviet nations are fighting alongside Islamic State militants.

“We can’t allow them to use the experience they have just gained in Syria back home,” he said.

Putin’s comments come a day after President Barack Obama announced plans to keep about 9,800 U.S. troops in place in Afghanistan through most of next year to continue counterterrorism missions and advise Afghans who are battling a resurgent Taliban.