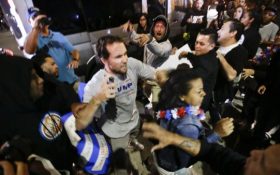 While the mainstream media was salivating over violent outbursts at Republican presidential candidate Donald Trump’s rallies, The Horn News was investigating — and what we found was disturbing.

In March, The Horn first reported on leftist groups that were conspiring to incite violence and protests at Trump rallies, including Black Lives Matter, the anti-Trump union bosses at SEIU –the biggest public-sector labor union in the country — and MoveOn.org.

The new information comes from a year-long investigation into the Clinton campaign’s underhanded tactics by political activist James O’Keefe’s “Project Veritas,” and what the group uncovered is stunning.

Watch below and see video evidence of pro-Clinton super PAC directors and executives bragging about their illegal cooperation with the Clinton campaign, and their organizations active roles in training and paying so-called “bird dog” agents to incite violence at Trump rallies.

These pro-Clinton insiders are so committed, they even brag about using mentally ill homeless people to do their dirty work:

It was a coordinated effort by Clinton supporters so that the mainstream media could paint Trump political rallies as hate-filled, violent gatherings, rather than the patriotic pro-America gatherings his supporters claimed they were.

And there’s no doubt the mainstream media ate the narrative up, spending months painting Trump supporters as violent and unstable — and largely ignoring political acts of terror and violence from the other side, such as this weekend’s firebombing of a Republican office in North Carolina.

According to O’Keefe, that’s going to end — today.

Tomorrow's video is so damning, we'll have the corporate media forced to cover this. Even if they're dragged kicking and screaming. #Veritas