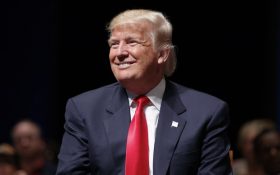 Now, new national polls have shown that voters are shifting toward Trump just about everywhere — and the news has the Clinton campaign scrambling.

All aboard the Trump Train. Next stop, the White House.

The notoriously pro-Clinton CNN national poll now has Trump up 2 points over Clinton.

And The Los Angeles Times’ most recent national poll shows Trump has grabbed a STAGGERING 6-point national lead over Clinton in a head-to-head match up.

Even the polls showing a statistical tie should be taken with a grain of salt. For example, the most recent CBS News/New York Times and Reuters polls have the two candidates evenly tied — but those polls focus on so-called “likely voters,” and ignore the millions of new and previously disenfranchised voters that Trump is bringing into the fold.

Trump’s appeal is VERY widespread among these voters — and it’s likely that he’s drawing even more national support than pollsters realize.

Do you think Donald Trump is going to win in November? Comment with your questions below.