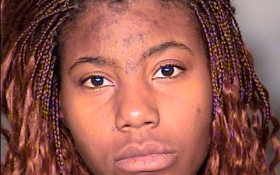 Lakesisha N. Holloway, 24, has reportedly claimed she turned her car into a missile and mowed down dozens of Las Vegas pedestrians yesterday because she was feeling “stressed.”

The homeless woman, accused of killing one person and injuring dozens after slamming a car carrying her 3-year-old daughter into a crowd on the Las Vegas Strip, told authorities she was stressed out after being chased by security guards from parking lots where she had been trying to sleep, according to a police report.

Holloway resided in Oregon and had been in Las Vegas for about a week in her 1996 Oldsmobile sedan, parking it at garages throughout the city, Clark County Sheriff Joe Lombardo said.

After her arrest, Holloway “described a stressful period today where she was trying to rest/sleep inside her vehicle with her daughter but kept getting run off by security of the properties she stopped at,” the police report states.

“She ended up on the Strip, ‘a place she did not want to be,'” the report quoted her as saying. “She would not explain why she drove onto the sidewalk but remembered a body bouncing off her windshield, breaking it.”

Investigators said Holloway had run out of money and she and her daughter had been living in the car. Police believe she was headed to Dallas to find her daughter’s father after they had a falling out.

Holloway is accused of intentionally mowing down people on a busy stretch of Las Vegas Boulevard, killing a woman from Arizona and injuring dozens of others on Sunday night.

After the crash, she parked at a casino a few blocks away, told a parking attendant that she had run down people and asked the valet to call 911, Lombardo said. Her daughter, who was in the backseat, was not hurt.

The sheriff said Holloway was stoic when police arrived, showed no resistance and spoke coherently about what happened. He declined to elaborate on what she said.

“She didn’t appear to be distressed due to her actions. That’s the best way I can describe it,” Lombardo said.

The crash happened in front of the Paris and Planet Hollywood casino-hotels and across from dancing water fountains of the Bellagio hotel-casino. Droves of visitors to the stretch walk from one casino to another.

There was no evidence that Holloway had consumed alcohol, but a drug recognition expert at the scene determined that she was under the influence of some sort of stimulant, Lombardo said.

Holloway, who was being held without bail, will be charged with murder with a deadly weapon, said Clark County District Attorney Steve Wolfson, who anticipated “a great number” of additional charges.

“When a person drives a 2,000-pound-plus motor vehicle intentionally onto a sidewalk, killing and injuring scores of people, that’s murder,” Wolfson said.