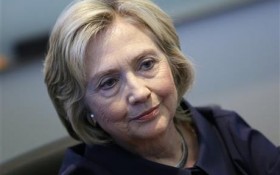 It looked like it would never happen, but the day has finally arrived. After three interviews and five days, former secretary of state Hillary Clinton finally apologized yesterday for mishandling classified emails on a private server.

Why the sudden reversal? Some Republicans think it’s simple – she’s not actually sorry, but was forced to say so out of desperation. As questions continue to arise over Clinton’s email use — and amid criticism that she was refusing to acknowledge a mistake — her poll numbers in the presidential race have been slipping fast.

Clinton’s late-arriving reversal came just 24 hours after she insisted in an interview with The Associated Press she didn’t need to apologize because “what I did was allowed.” That comment came after a sit-down with NBC News on Friday, in which Clinton said only that she was sorry if her actions had caused voters any confusion.

The apology evolution is the latest chapter for an issue that has dogged Clinton’s presidential campaign for months. Despite a big fundraising advantage and a slew of endorsements from party leaders, Clinton’s standing with voters has slipped — multiple polls show a majority of Americans don’t find her honest and trustworthy.

Clinton’s campaign offered no immediate explanation for why she suddenly changed her mind on an apology.

But Republican National Committee spokeswoman Allison Moore has an idea why. He suggested Tuesday that Clinton was only apologizing because “she got caught and is dropping in the polls.”

With an apology that was a long time coming now behind her, Clinton said Tuesday she has no doubt she can survive the email controversy.

More and more voters, however, seem to disagree.