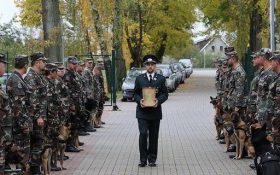 A Lithuanian police dog has been given a solemn official burial ceremony in the Baltic country, complete with state border guards firing off a volley salute.

An urn with the ashes of the Belgian Shepherd named Ramzis was solemnly carried before officers and dogs from the State Border Guard Service’s canine squad during Wednesday’s ceremony in the western town of Pagegiai.

Ramzis, a 3-year-old male, was killed in action on Sept. 27, when state border officers were tracking smugglers near Russia’s Kaliningrad regional border.

The shooting has angered Lithuanians and a campaign has been launched to raise money to erect a statue to commemorate the dog.