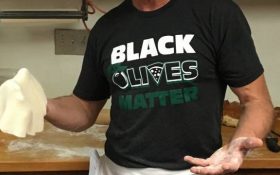 An Italian restaurant in New Mexico is drawing criticism on social media for making merchandise with a slogan mimicking the Black Lives Matter movement.

News station KOAT-TV in Albuquerque reports that Paisano’s in Albuquerque is selling “black olives matter” shirts and hats after making national headlines for putting the phrase on a sign outside the restaurant.

Owner Rick Camuglia says he emblazoned the phrase on the restaurant’s main sign to sell a new recipe: a tuna dish with black olive tapenade.

Camuglia posted pictures of the dish and the sign on Facebook, drawing complaints he was being insensitive and trivializing a movement aimed at trying to stop police shootings of black residents.

Camuglia says he’s not trying to stir racial tensions and was only trying to sell food.