Paul Ryan’s State of the Union guest is… how old!? - The Horn News 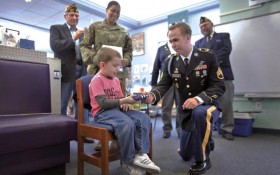 A 4-year-old Wisconsin boy will be one of House Speaker Paul Ryan’s guests for President Barack Obama’s final State of the Union address.

Logan Barritt started an effort to send care packages to service members abroad after a lesson at his school. He lives in Ryan’s congressional district.

Additional guests include people who have worked to alleviate poverty. Ryan has said he wants to find new ways to fight poverty as speaker.

Ryan also invited representatives of the Little Sisters of the Poor, a group that has challenged Obama’s health care overhaul over birth control.

The guests will be seated in the speaker’s box in the House gallery. Ryan will sit behind the president during the speech. It’s his first State of the Union since being elected in October.