Pass the salsa! Chips and beer spill across highway - The Horn News 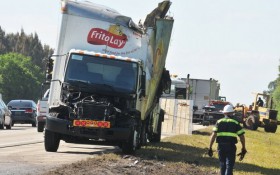 It wasn’t a happy hour for some central Florida drivers when trucks carrying Busch beer and Frito Lay chips collided, spilling them both along Interstate 95.

Roberto Ferrer Rodriguez of Miami told troopers he was trying to move his beer truck into the center lane but saw another vehicle and swerved back into the right lane. His truck struck the chips truck.

The Frito Lay truck overturned. The beer and chips spilled onto the highway. Traffic backed up as troopers closed the road while clearing the debris.

Rodriguez was ticketed for failing to maintain a single lane.