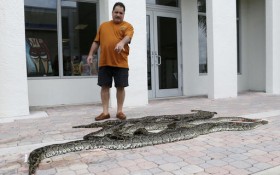 The 106 Burmese pythons captured over a month long hunt won’t help control Florida’s invasive snake population, but wildlife officials said Saturday that doesn’t matter as much as the awareness they bring to the state’s environmental concerns.

Thousands of pythons, far from their natural habitat in Southeast Asia, are believed to be stalking Florida wildlife in the beleaguered Everglades. The tan, splotchy snakes can be elusive in the wetlands, but Florida Fish and Wildlife Conservation Commission officials say volunteer python removal programs and two state-sanctioned hunts since 2009 are focusing more eyes to the problem.

“Whether they’re fishermen or they’re hunters or they’re hikers or they’re birdwatchers — they’re all looking for the python,” said wildlife commissioner Ron Bergeron. “The success of the ‘Python Challenge’ has broadened out to thousands of people now.”

The longest python caught during the hunt that ran between Jan. 16 and Feb. 14 was 15 feet long. It was caught by a team led by Bill Booth of Sarasota.

Over 1,000 people from 29 states registered to remove pythons from South Florida’s wetlands.

Daniel Moniz of Bricktown, New Jersey, suffered bites to the face, neck and arm from the 13-foot-8.7-inch python that won him a prize for the longest python caught by an individual.

Faced with a winter layoff from his landscaping job, he completed the wildlife commission’s online training and spent a month biking over 40 miles a day over levees through the wetlands, eventually bagging a total of 13 pythons.

The longest one tried to swim away, until he dove on top of it. “I got it under control and stuffed it in a pillow case,” he said.

Frank Mazzotti of the University of Florida said the stomach contents of the captured pythons are still being analyzed, but so far the prey has included a fawn and a wood stork and other large wading birds.

Once the necropsies are complete, the hunters can reclaim their dead snakes. About a third of have been turned over to Brian Wood of All American Gator in Hollywood.

Half the hunters want him to make something from the pythons they caught — a wall hanging, a pair of boots, or a purse for the wife at a fraction of the cost of a python clutch bearing a luxury designer logo. 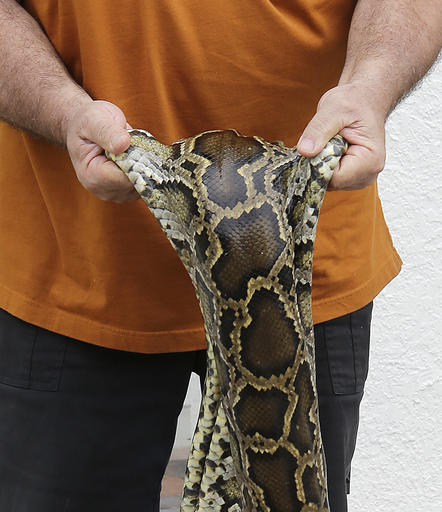 In this photo taken Tuesday, Feb. 23, 2016, Brian Wood holds a purchased python in his hands at All American Gator Products in Hollywood, Fla.  (AP Photo/Alan Diaz)

The other half are selling him their dead snakes for up to $150 apiece — about the same price Wood pays for fully processed, tanned and dyed python skins imported from Asia. (In Wood’s store, swatches show python skins dyed teal, rose pink, pale yellow and metallic gold, among other hues.)

Wood also turned about 20 pythons caught during the 2013 Python Challenge into accessories. Pythons that once slithered through the Everglades now slide out of pockets as black-and-white billfolds or hang off arms as roomy purses. A couple now stride down sidewalks, transformed into pairs of Chuck Taylor sneakers.

He says he regularly supplies European luxury brands with alligator skins, but they aren’t interested in Florida’s pythons. The state’s invasive snakes aren’t tracked by international trade conventions, and the volume can’t compare with the hundreds of thousands of python skins supplied each by about 10 countries in Southeast Asia.

They’re also looking for sustainable sources of python skins, while Florida just wants to be rid of its python supply.

Unfortunately, pythons are not Wood’s only supply of invasive species leathers.

“I’m trying to promote this lizard we have that’s taken over,” he says, meaning iguanas, which his sons are hired to hunt in South Florida’s urban and suburban environments.