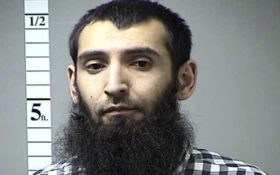 What do the Women’s March, Glamour magazine, and the radical Islamic terrorist who killed 8 New Yorkers this week have in common?

The Left’s favorite Muslim activist is at the center of a twisted puzzle that literally let terrorist Sayfullo Saipov get away with murder.

Linda Sarsour – one of the chairs of the Trump-trashing Women’s March – helped get the cops off his trail.

Let’s start with the attack and work backwards.

As soon as someone notified her that the killer yelled the Muslim prayer “Allahu akhbar!” during his attack, Sarsour tried to deny it.

It begins. CNN reports murderer said "Allahu Akbar." Queue the Islamophobia. Many Muslims will now have to answer to Manhattan. Unfortunate.

Is this actually confirmed or are they just hastily reporting what they see on twitter? https://t.co/CergHNLWJx

After police confirmed the Islamic quotation, she still tried to beat back the idea that he killed innocent people because of their common religion.

Acts of terror don't belong to any faith. Let's focus on the victims and their families and pursue full justice for them.

But just minutes later, she admitted…

Every believing Muslim says Allahu Akbar every day during prayers. We cannot criminalize "God is great." Prosecute the criminal not a faith.

PC liberals are falling all over themselves to claim this terrorist attack had nothing to do with Saipov’s religion – but the facts show, that’s exactly how we got into this in the first place.

He and Sarsour have lots of reasons to work together.

New York cops used to monitor the mosque that this twisted killer attended… until Linda Sarsour personally got them to stop.

Miller’s the one who gave the order.

In 2005, the NYPD set up a “Demographics Unit” to key a close eye on potential terrorists. Undercover policemen would go into mosques to see if anyone there was spouting extremist rhetoric or threatening to wage jihad.

One of the places they had under surveillance was the Omar Mosque in Paterson, New Jersey – the mosque that Saipov attended.

But then Sarsour started demonstrating. She said that watching for radical Muslims inside mosques is “Islamophobic,” and whined that “the Demographics Unit created psychological warfare in our community.”

That’s better than having terrorists wage real warfare against Americans, right? Not to Sarsour.

She raised hell until she finally scored a meeting with police brass over the renamed “Zone Assessment Unit” in 2014.

Now he’s doing a little CYA because of his decision. After all, if the attack did have something to do with the killer’s mosque, Miller blew it – by listening to Sarsour.

It’s not like Sarsour’s views were a mystery. Her cousin and brother-in-law served time in Israeli prisons for aiding terrorists, and her husband praised Palestinian terrorist thugs.

His actions must have encouraged her to get braver and bolder in her fight to make America a Muslim country.

• Sarsour has tweeted that America is being subjected to Islamic Sharia law “sounds nice, doesn’t it?”
• Sarsour made the Muslim headscarf the preferred wardrobe of the Women’s March, right after “pussy hats.”
• Sarsour told her fellow Muslims to wage “jihad… not only abroad in the Middle East or on the other side of the world, but here, in these United States of America, where you have fascists and white supremacists and Islamophobes reigning in the White House.” She said that in front of the Islamic Society of North America, even though ISNA was an unindicted co-conspirator in terror funding, and a federal judge ruled there was “ample evidence” tying ISNA to Hamas.
• Sarsour met this year with convicted Palestinian terrorist Rasmea Odeh, who was part of a plot that killed two Jewish college students in 1969. Odeh was deported and stripped of her U.S. citizenship in March for lying to federal officials about her blood-soaked past.

She and Miller helped make “Islamophobia” as scary, or even scarier, than actual Muslim terrorism – and it’s resulted in dead bodies.

Saipov’s neighbors reported that they were creeped out that Saipov’s devout Muslim wife wore a headcovering where “you could only see the eyes.” Another neighbor said he was highly suspicious the whole week that Saipov had a heavy-duty truck parked on the street. “I think he was practicing,” the Hispanic man said.

But he didn’t tell anyone. He could be accused of being anti-Muslim, racist – you know, deplorable – and lose, everything.

Now Sarsour’s community organizing has paid off with its very own act of jihad against the Great Satan.

So, how did Glamour magazine reward her? Sarsour is being honored as a role model for teenage girls. Glamour magazine made her one of its four “Women of the Year” in its new issue, which infested newsstands on Friday.

Palestinian-American activist Linda Sarsour has been honored as one of Glamour’s Women of the Year. ???? pic.twitter.com/MP9CDT7evB

Our country has two choices: We can either fight the enemy with everything we’ve got – turn in terrorists even if we’ll be called “Islamophobic” – or we can put on the headscarves and start bowing to Mecca five times a day.

What will you choose?