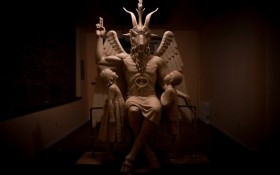 In what the Associated Press billed as “largest public satanic ceremony in history”, satanists in Detroit unveiled a massive statue of their idol in front of hundreds of cheering supporters and reporters at a ceremony in late July. The group then announced plans to use the constitutionally protected freedom of religion to rub this right in the face of every day America.

Now they’ve finally decided how.  The statue is going to be constructed outside the State Capitol Building in Little Rock, Arkansas.

The group issued a press release Tuesday stating, “In a letter sent via certified mail to Arkansas’ Capitol Arts and Grounds Commission, The Satanic Temple formally requested permission to place their controversial ‘Baphomet’ monument alongside a Ten Commandments monument at the Capitol in Little Rock,”

The 1½-ton statue of “Baphomet” is 8 1/2 feet tall, backed by an inverted pentagram and flanked by statues of two young children gazing up at the creature, who has horns, hooves, wings, and a beard.

The satanic group previously erected a display in December outside Michigan’s state Capitol in Lansing. The Satanic alter featured a snake offering a book called “Revolt of the Angels” as a gift. The snake was wrapped around the Satanic cross on the 3-feet-by-3-feet display.  It was taken down for good after the Christmas season.