Outrage! Media's anti-Trump hysteria is WORSE than ever - The Horn News 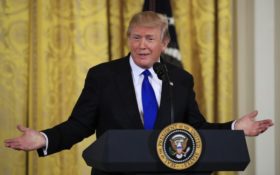 A new survey shows that – between sipping cocktails and rubbing elbows with the rich and famous – the legacy media has decided to step up how much venom they spew about every single thing the president says or does.

That’s right. The more Americans that approve of the president, the more time the TV titans spend running him down.

The nonpartisan Media Research Center analyzed nightly news coverage of Trump this January and February… and it’s not even close to balanced.

They found that 91% of all media coverage of the Trump presidency was negative – and that doesn’t include Jimmy Kimmel, CNN, or MSNBC.

A whopping 647 out of 712 statements uttered by supposedly “neutral” parties on ABC, NBC, and CBS were negative toward Trump.

That’s actually worse than last year, when 90% of their comments were disparaging toward the president.

Media coverage of Trump has moved in the opposite direction of the American people.

With the economy going gangbusters and ISIS on the run, Trump’s approval rating hit a high of 49% in February.

Rasmussen just announced that my approval rating jumped to 49%, a far better number than I had in winning the Election, and higher than certain “sacred cows.” Other Trump polls are way up also. So why does the media refuse to write this? Oh well, someday!

Even phony media polls had Trump’s numbers steady or rising, through the first two months of the year.

One-quarter of all nightly news coverage of the Trump presidency in January and February was about the collapsing Russian collusion “scandal” – and the coverage has increased as the scandal has started to disappear.

“Since Trump took office on January 20, 2017, the three broadcast evening newscasts have spent a combined 1,438 minutes on the Russia investigation, accounting for more than one out of every five minutes (21%) of coverage of the Trump presidency,” MRC stated.

The flip-side to this negative coverage means the network anchors are also hiding the news you need to know.

The Big Three networks devoted almost no time to “the continued strong economy and jobs (12 minutes); the positive impact of the big tax cuts passed in December (9 minutes); and the fight against al Qaeda and ISIS (a mere 1 minute, 23 seconds),” MRC reported.

According to the MRC, “Without question, no President has ever been on the receiving end of such hostile coverage, for such a sustained period of time, as has Trump.”

Honest people on both sides of the political aisle agree the media painted a huge target on the 45th president’s back. Former President Jimmy Carter even said the “media have been harder on Trump than any other president certainly that I’ve known about.”

Media bias matters, because the Big Three networks are where 24 million viewers get their news every week – and the networks still pretend it’s unbiased, independent, and objective.

Here’s some news for the newscasters: You might want to try steppinging foot outside your elitist cocoons.

The last time media coverage of Trump was 91% negative, he won the presidential election.