Anti-Trump author busted in LIE on live TV (he ran away!) - The Horn News 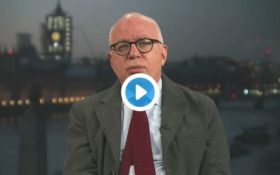 Bestselling writer Michael Wolff, author of the controversial anti-Trump book “Fire and Fury”, was just allegedly caught in a lie on live television — and rather than answer the questions, he ran away from the camera.

When he asked if Trump was owed an apology, Wolff got up and walked off.

“You said during a TV interview last month that you are absolutely sure that Donald Trump is currently having an affair, while President, behind the back of the First Lady,” Fordham said. “I repeat, you said you were absolutely sure.”

“Last week, you backflipped and said, ‘I do not know if the President is having an affair.’ Do you owe the President and the First Lady an apology, Mr Wolff?” Fordham asked.

Wolff refused to answer, and seemed to pretend his earpiece was malfunctioning. “I can’t hear you. Hello?” he replied

“Just last month you said you were absolutely sure that the President was having an affair, and now you say he is not,” Fordham repeated.

Wolff insisted he couldn’t hear anything, and Fordham pressed. “You aren’t hearing me, Mr. Wolff?” Fordham asked as Wolff got up and walked away from the camera. “Mr. Wolff was hearing me before, but he’s not hearing me anymore. So the interview may be over.”

Just one problem — the Australian station has the audio that Wolff was hearing on his end.

It seems the controversial author heard the questions perfectly clearly… but simply refused to answer.

LISTEN – This is what Michael Wolff was HEARING in his earpiece when he claimed he couldn’t hear my question on @TheTodayShow this morning. pic.twitter.com/dl3ZvQfKWm

Of course, this isn’t the first time Wolff’s dubious claims have come under fire on-air.

He was once kicked off MSNBC’s “Morning Joe” for his unsubstantiated comments.