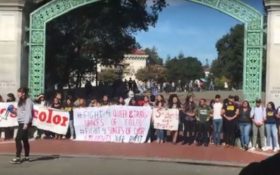 If there’s ever any questions the loony left is filled with horrible racists, just take a look at the video below.

It’s hard to believe, but it’s real. You can see for yourself below —

This is what we’re up against, folks. It’s outrageous. It’s racist. It’s illegal.

And it’s the future liberals envision for our country.

Students at the University of California, Berkeley held a violent protest on campus Friday to demand additional segregated “spaces of color” for non-white students.

A video of the protest shows demonstrators repeatedly heckling white passersby, barring them entry to a key bridge on campus by forming a human chain while simultaneously allowing students of color to pass unmolested.

At one point, the video even shows a protester refusing to allow an older white man to cross the bridge, eventually directing him to cross by way of a creek that flows underneath the bridge.

Just a few moments later, another white man attempted to cross the bridge by forcing his way through the crowd, only to be surrounded by a mob of students who began shouting expletives at him as they pushed him back in the direction he had come from.

Time and again, white students and professors were denied entry to the bridge as they were surrounded by aggressive protesters shouting “go around!”

Apparently, protesters were angered because one of their “safe spaces” was relocated to the basement of a building where it had previously occupied the fifth floor. When protesters were asked about the motive for their demonstration, though, they refused to be recorded, leaving little to no explanation for the rationale behind such an aggressive protest.

One protester did offer her take on the issue, however, when she was given the chance to speak to the crowd, shouting “Berkeley, why the fuck do you let UCPD do what they want with our bodies?”

“I’m talking to you, UCPD,” she then asserts before declaring, “I don’t give a fuck about you.”

The protest eventually made its way to an on-campus building that was apparently rented out to a private corporation, leading students to post an eviction notice on its doors alleging a “misallocation of space.”

“You are hereby notified by the students of the University of California, Berkeley to vacate the premises immediately,” it read, according to video footage of the demonstration. “University administration wrongly allocated this two-story facility to a third-party corporation, keeping in line with its intensifying legacy of prioritizing financial profit over student needs.”

The mock eviction notice went on to demand that the building be converted into a “queer alliance resource center,” threatening that “community action will continue to escalate” if they “fail to vacate immediately.”

The protest then made its way through Berkeley’s student center, where the activists disrupted students from their studies with chants of “students over profit” before finally making their way to an off-campus intersection, where, naturally, they blocked the flow of traffic.