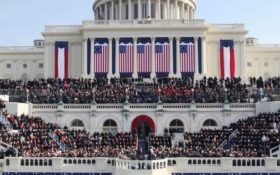 When will the liberal temper-tantrum over President-elect Donald Trump’s victory end?

Never, if radical leftists have their way.

Protesters have announced a plans for an anti-Trump march, and some groups are openly plotting to disrupt the ceremonies on Inauguration Day — and House Democrats are joining them.

Two House Democrats have announced their intentions to send an insulting message to Trump and the American voters that elected him by boycotting the inauguration — an unprecedented move for Congressional lawmakers.

The United States has a long, proud history of members of Congress putting aside party or political differences and attending the inauguration.

For Massachusetts Rep. Katherine Clark and Illinois Rep. Luis Gutierrez of Illinois, that history doesn’t matter. They said they are skipping the Jan. 20 ceremony at the Capitol to send a message to American voters.

In fact, Gutierrez is going so far as to join anti-Trump protestors, saying he will attend the Women’s March on Washington on Jan. 21 to speak out against Trump’s election.

They’re not alone. There will be multiple leftist groups in D.C. to assemble in the capitol on Jan. 20th — and at least one group is hinting at plants to disrupt the Inauguration Day ceremonies with violence.

“We call on all people of good conscience to join in disrupting the ceremonies,” leftist group DisruptJ20 has said. “If Trump is to be inaugurated at all, let it happen behind closed doors, showing the true face of the security state Trump will preside over. It must be made clear to the whole world that the vast majority of people in the United States do not support his presidency or consent to his rule.”

“#DisruptJ20 will be the start of the resistance. We must take to the streets and protest, blockade, disrupt, intervene, sit in, walk out, rise up, and make more noise and good trouble than the establishment can bear. The parade must be stopped. We must delegitimize Trump and all he represents,” the group’s website reads.

“It’s time to defend ourselves, our loved ones, and the world that sustains us as if our lives depend on it—because they do.”

The effort is backed by celebrity filmmaker Michael Moore, who Tweeted —

Disrupt the Inauguration. The Majority have spoken – by nearly 2.7 million votes &counting! Silence is not an option https://t.co/HSmP3pREvy