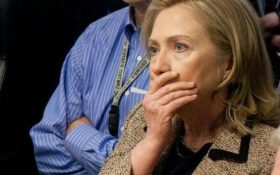 The more she talks, the more clear it becomes — Democratic presidential candidate Hillary Clinton has nothing but contempt for American voters, and that anyone who doesn’t back her is an unemployed loser, a deplorable racist, or worse.

In a leaked recording from a February fundraiser, Clinton expressed contempt for young voters who were siding with her primary opponent, Vermont Sen. Bernie Sanders.

Clinton called them “children of the Great Recession” and implied they all were unemployed losers that “are living in their parents’ basement. They feel that they got their education and the jobs that are available to them are not at all what they envisioned for themselves.”

Bernie should pull his endorsement of Crooked Hillary after she decieved him and then attacked him and his supporters.

Crooked H is nasty to Sanders supporters behind closed doors. Owned by Wall St and Politicians, HRC is not with you. https://t.co/WN1lyCDXla

The hacked recording of Clinton speaking at the fundraiser six months ago in McLean, Virginia, was published by the Washington Free Beacon this week.

Young voters have been a stumbling block for Clinton. Many preferred Sanders, a Vermont senator who promised free tuition at public colleges and nationalized health care.

At the fundraiser, Clinton said she was frustrated with young millennials and questioned the idea of a political revolution, calling it a “false promise,” though she said that wasn’t the right message for “idealistic young people.”