Outrage! Football coach to be fired for praying - The Horn News 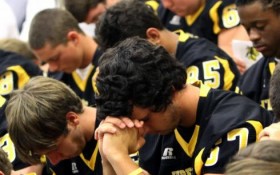 A Washington football coach wouldn’t back down after he was told by district officials to stop leading prayers after games.

The coach went ahead with a prayer at the 50-yard line after this weekend’s homecoming football game, leading to an atheist legal organization to call for the coach’s head.

The Kitsap Sun reports Bremerton High assistant coach Joe Kennedy knelt as his players left the field and prayed on Friday. Players from the other team and others joined him.

FFRF Legal Fellow Madeline Ziegler demanded in a letter that coach Kennedy “must be dismissed” for refusing to comply.

Superintendent Aaron Leavell has said Kennedy’s long-standing practice runs counter to the constitutional mandate for separation of church and state. He said in a statement before the game that staff must refrain from religious expression while on duty.

Kennedy’s law firm, Texas-based firm Liberty Institute, says the district has no right to ban the coach from personally praying. They say he didn’t encourage or discourage students from participating.