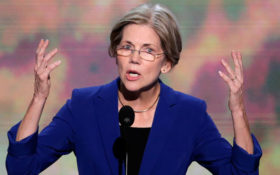 Last week, The Horn reported that Senator Elizabeth Warren stunned voters when she promised to raise taxes for almost every American  — and now she is bashing President Donald Trump after a report stated he is considering another tax cut.

On Monday, The New York Times reported that the Trump administration is considering bypassing Congress to grant another tax cut and Warren is already angry at Trump’s possible next move.

The Massachusetts senator tweeted, “[email protected] wants to go around Congress & hand $100 billion to his rich buddies on top of $1.5 trillion he gave away to billionaires & big corporations last year.”

.@realDonaldTrump wants to go around Congress & hand $100 billion to his rich buddies on top of $1.5 trillion he gave away to billionaires & big corporations last year. DC works great if you’re rich & powerful. How about a gov't that works for everyone? https://t.co/Go0He6UoKl

Warren added, “DC works great if you’re rich & powerful. How about a gov’t that works for everyone?”

In a recent interview with CNBC’s John Harwood, Warren admitted that raising the tax rates up to 50 percent may not even be high enough…  and with rates that high it does not seem like she cares to provide a government that works for everyone.

Warren’s outburst on Twitter on Monday came after comments were made by Treasury Secretary Steve Mnuchin at a meeting in Argentina this month.

But, that did not stop Senate Minority Leader Chuck Schumer from also weighing in on the New York Times report.

“At a time when the deficit is out of control,” Schumer said, “wages are flat and the wealthiest are doing better than ever, to give the top 1 percent another advantage is an outrage and shows the Republicans’ true colors.”

Apparently Schumer has not seen the most recent job report that states over 200,000 jobs were added in the U.S. in June. Not to mention, unemployment has rose from an 18-year-low.

It is no secret that Democrats were furious over Trump’s tax reform last year and have plans to raise taxes if they win the 2018 midterm elections.

There is no better time than to now to support Trump and his administration… because your hard-earned money could be at stake.