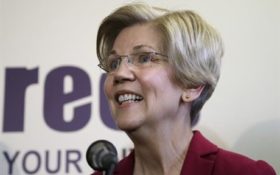 The 2018 midterm elections are more critical than most people think. It is important to send President Donald Trump the support he needs in Washington, D.C. — but it’s even more critical if you’re an American on a budget.

Make no mistake: Democrats are eager to raise taxes. And if they win, there’s no telling how much they’ll take from taxpayers.

During a CNBC interview Tuesday, Massachusetts Sen. Elizabeth Warren promised that if Democrats win, they’ll raise taxes for almost every American… up to a 50 percent tax bracket for some of the top brackets.

Their first target is Trump’s 2017 tax cuts…. but they won’t stop there, Warren promised.

“If Democrats take the Congress, if you’re in the White House, or both, would you like to see these corporate tax cuts repealed?” CNBC’s John Harwood asked Warren.

“Yeah, I really want to see them rolled back,” Warren replied. Then she said Democrats wouldn’t stop at the old 35 percent tax rate.

“Here’s how I look at budgets and taxes are at the heart of this. A lot of people think they’re just numbers; they’re not. They are the expression of our values,” Warren said, before saying that Trump’s tax cuts were only “crumbs” to the average American.

“What’s too high for the top personal rate?” Harwood asked. “Is 50 percent too high?”

“It’s not about the numbers,” Warren said, and promised it would all come down to backroom negotiations.

In fact, she said they might not even stop at 50 percent tax rate.

This is what is at stake in the election, folks.

Democrats want the government to control your money and choose where it’s spent.

Warren herself wants to tax between 50 to 90 percent of some American’s personal income. She’s not even hiding it, she’s talking about it live on national television.

But that’s only if Democrats win control of the House and Senate in November.

That means, the 2018 election might just be the most important election in American history.