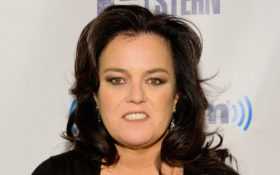 Like just about anything that comes out of Rosie O’Donnell’s mouth, some things are better left unsaid.

Rosie has taken her feud with President-elect Donald Trump snake-belly low with a tweet that was despicable even for the snarling Hollywood starlet.

What did she base that rumor on? Nothing except her own home diagnosis from observing the way he clapped his hands at the Republican convention.

Barron Trump Autistic? if so – what an amazing opportunity to bring attention to the AUTISM epidemic https://t.co/Acgy1Qxyqi via @YouTube

The American people play politics hard, but trying to humiliate a little kid is way, WAY below-the-belt. Her message racked up hundreds of negative comments, like: “I am in tears. How can you be this CRUEL??” and “Rosie, this reaches a level I thought you’d never sink too. Your vile hatred is nauseating! I used to be such a huge fan.”

Rosie the Reviler realized she had to do damage control, pronto.

First, “Doctor” O’Donnell defended herself by saying someone else produced the 7-minute-long YouTube video, which contains other “evidence” that Barron is autistic: footage of Barron squirming in his seat during the extremely long GOP convention proceedings and jerking his eyes open during his father’s victory speech – at 3 in the morning. (If the boy weren’t tired, the left-wingers would say Trump abused him by keeping him awake on a school night.)

Finally, on Saturday, Rosie played her own Teflon trump card: She claimed that her adopted, three-and-a-half year-old daughter, Dakota, is autistic. She wrote on her website that, since she lives with the condition, Rosie can see “these symptoms so many do not understand.”

She even pretended that she was trying to comfort the Trump family! She hoped President-elect Trump would see her tweet and know “we r not alone, there r others living this too.”

“i tweeted from my heart,” she wrote in an all-lower-case, mistake-riddled post that looks like it was meant to imitate a poem, without the style, rhythm, or first hint of human emotion.

Yep, this was all a big-hearted, public service announcement on her part that “had nothing to do with donald.”

She closed by begging her readers to “save democracy from this madman.” (But no hard feelings! Just lookin’ out for ya, bro!)

For all we know, Rosie may be right in her amateur diagnosis of President-elect Trump’s son. She might not. We’re not doctors, and we won’t pretend to be.

The simple point is that these comments are not hers to make. Not in public, not ever.

But she wouldn’t know basic human decency if it smacked her in the face hard enough to cause her jowls to jiggle.

Bringing up a potential medical condition in public regarding a rival’s children is so despicable, there’s no nice way to sugar coat it.

Rosie should know better. Since she apparently doesn’t, she needs to be called out on it.

People forget the “queen of nice” has made a career out of publicly humiliating people. She practically accused Tom Selleck of being an accomplice to murder for supporting the Second Amendment.

And – psst! – she actually started the feud with Trump in 2006, mocking his business sense, his marriages, and his hair (Even though Rosie has also been divorced twice.)

So, where was the media in all this? If Rosie were a Republican, they would have ripped her to shreds for spreading “fake news,” and call her an inhuman monster.

Instead, this is just another example of the media’s double-standard: Defend the Democrats, ream the Republicans.

The media ignored shocking video footage of Malia Obama smoking marijuana in Chicago this summer. Then they passed up the chance to report a wild party she attended on Martha’s Vineyard, which was busted up by police.

Chelsea Clinton is still off-limits at the age of 36. David Shuster lost his job on MSNBC eight years ago for commenting on Chelsea’s ability to sweet talk donors out of their money. (Two guesses where she learned that.)

But a washed-up actress tweets a baseless rumor about a 10-year-old Republican’s kid? Cover it 24/7!  Throw him to the wolves!

The media could stand to learn from the election. Their hyper-biased coverage helped elect Trump in the first place.

And Rosie the Ridiculer could stand to spend a little more time worrying about her own children. O’Donnell has a troubled relationship with her oldest daughter, Chelsea. When she ran away from home last August, Rosie told reporters that the 19-year-old had a “mental illness” and had stopped taking her meds. Chelsea said she suffers from depression – but she’s not mentally ill – and that she didn’t run away at all.

Rosie, her loving adoptive mother, kicked her out of the house, she said.

Later, when Rosie found out that Chelsea had gotten married without her knowledge, she took away her car and cut off all financial support. “Rosie wanted to control the situation. She has all the power,” one person close to the situation told the Daily Mail.

Chelsea told the world that her mother is a two-faced liar. “I find her not genuine a lot of the time. When we’d go out, she was a completely different person in public than at home and I had a hard time with that,” she said. “It’s like two different people.”

Does Rosie O’Donnell really want the media to begin investigating celebrities’ relationships with their children? Or who they really are when the cameras aren’t rolling?

We’ve seen a glimpse of O’Donnell’s heart, and it’s ugly.